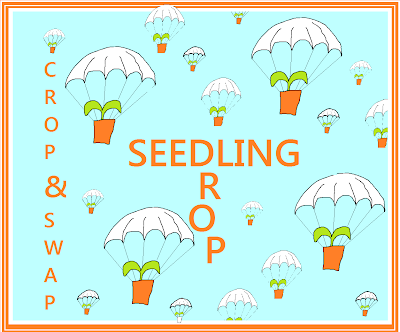 At 2100 hours Charlie Crop & Swap Squadron were deployed at a Drop Zone in your local area.


The Heirloom tomato new recruits are on a mission, to be adopted by local residents, to be dug in, ready for action and to thrive in their new location.


There are 50 new recruits now MIA and we are enlisting you to assist them to report in. 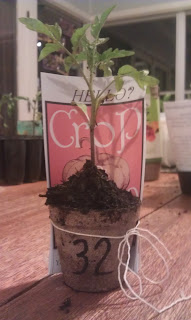 Please either comment below, send your communication brief via facebook or shoot us an email (details below). Outline which recruit you are in possession of (an identification photo in location would be thoroughly helpful), where you located the MIA Charlie Squadron member, who you are, where you are planning on putting your new recruit and any other particulars you wish to communicate to us, the 'Charlie Squadron head quarters'.

Enlisted to support the Charlie Crop & Swap recall mission is a local nursery that is currently in possession of 2 gift vouchers, potentially for you. The first is for the best all rounder Charlie Squadron New Recruit story (to be drawn Saturday 9th Nov at 1100 hours), the second is a lucky dip number draw, for anyone who reports their new recruits details to head quarters (to be drawn Sat 9th Nov at 1100 hours).

If you are in possession of a squadron recruit please offer it your water canteen, they will be thirsty. Also your recruit will be donning biodegradable fatigues (you can just plant it straight in the ground)but don't forget to record its dog tag identification number beforehand.

at The Crop & Swap Headquarters. 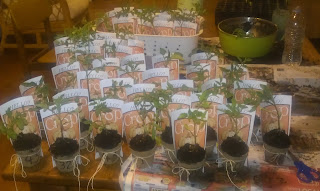 NB the squadron's last photo taken prior to deployment...
It is suspected that they will attempt to disguise themselves with
undercover identities, particularly flirtatious, young, female heirlooms.


Posted by Unknown at 10:01 PM No comments: Links to this post 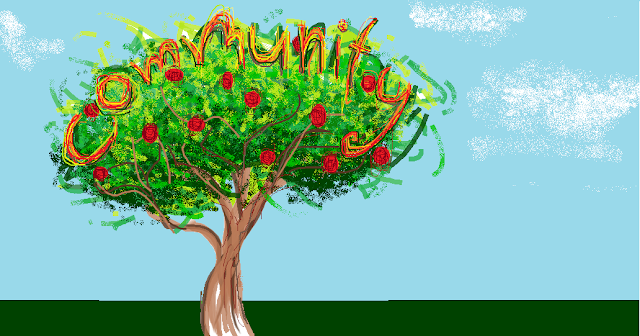 Howdy Swappers, Three years ago we did a letterbox drop to our closest neighbours, we'd had an idea to turn a grassy nature strip outside our house into a community orchard, and we wanted them to be a part of it. We invited them to come one Saturday morning with " a shovel, a fruit tree, some manure or just a whole heap of enthusiasm", and come they did! That day our neighbourhood united and together we planted citrus, stone fruit, pomegranate and avocado. It has become our community orchard, where baskets of fruit are left every few days for whoever needs a lemon or a grapefruit, where Marg from around the corner occasionally potters with her secateurs and some mulch and where, in the not too distant future, our community will reap the rewards of a huge variety of communal fruit... so now is where you come in...is there a space in your local neighbourhood for a community orchard? a patch or a verge where you can foresee lemon, orange and fig trees? If so, let the Crop & Swap community know and we can help with your planting day. Our hope is that swappers will lend a hand, a shovel, a fruit tree or a bag of manure to a fellow swapper starting a community orchard. Our aim this season is to start 3 more community orchards/gardens in the Blue Mountains.

Imagine a Blue Mountains where community orchards in lane-ways are the norm. If you'd like to volunteer your services, let us know below or on facebook how you can help ,
with neighbourly cheer,
the Crop & Swap team.
Posted by Unknown at 8:11 PM No comments: Links to this post

Protecting your fruit trees from pests

We've all had moments of jealousy when luscious fruit appears at Crop & Swap, and we wish we could bring the same but the pests get it first. Well Ben has given us some tips on how we can be 'that guy' or 'that girl' smugly rocking up. Just think of Mike and Sue with their luscious plums or Eduardo's flavour packed strawberries - well that could be you! 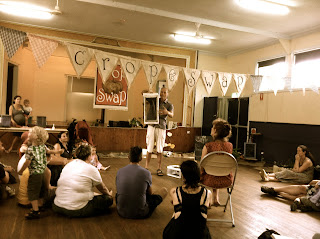 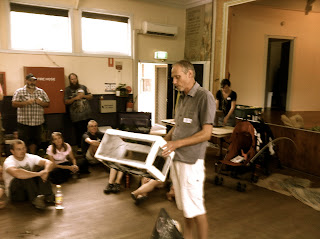 I've found this approach to be fruitful ;-)

Posted by Steve at 2:06 PM No comments: Links to this post

Last swap, Joe talked about the benefits of using black soldier fly larvae to compost kitchen scraps, much in the same way that a worm farm operates.

Black soldierfly have a rather short and desperate adult life, with the sole purpose of finding a mate, a pile of rotting compost, and a good pick up line before dropping dead.

BSF larvae eat just about any kitchen scraps including meat and dairy, as well as the usual fruit and vegetable leftovers, and can be cultivated in much the same way as composting worms, to break down food waste. A BSF composting unit can be easily built from materials found at your local hardware, and once a colony has been established they can consume food waste much faster than worms. The larve themselves make a fantastic feed for chickens and even fish. BSF larvae are high in both protein and calcium, which is perfect for chooks. they are non invasive and do not enter houses or spread disease like other flies.

Here is how it works. Food scraps go inside and the female BSF are attracted by the scraps. They fly in through the pipe at the top and down into the bin where they lay their eggs (in the hundreds). They like to lay their eggs in crevasses, so some sheets of corrugated cardboard attached to the inside make great maternity wards. the eggs hatch and the larvae fall on the food scraps, and get to work munching it up.

to begin a colony, start with a small amount of vegetable scraps. As they begin to break down, the adult fly's will naturally be attracted and enter the composter to lay their eggs. this can take some weeks, so be patient. BSF are most active during spring and summer, which after the best times to begin a colony.


As the larvae mature they develop the instinct to climb to higher ground. The larvae find their way to the pipes and climb up them, then slide down into the separate storage container, where they are unwittingly trapped to be fed to the chooks.

Keep the composter in the shade, out of direct sunlight. 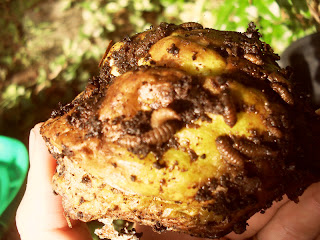 Make your own
there are a number of DIY designs on the net. we made ours using a clip lock tub, some PVC pipe parts, , some hessian and fly screen, a saw and a drill. The key is to angle the pipes at 35 degrees so that it is not too steep for them to climb.include some ventilation holes and cover with fly screen, and some drainage holes in the bottom, which you can cover with hessian. It takes less than half a leisurely hour to put together and cost us about $40 or you could buy one of the fancy ones online for about $200.

the main benefits are:
1. a very efficient method of waste disposal
2. meat and dairy waste can be added to established colonies, unlike regular composting methods, reducing your waste output.
3. the larvae make an excellent source of food for poultry and fish, and can be frozen for later use.
4. they don't spread disease like other flies, and rarely enter the home.
5. they emit a natural repellent to other flies once the colony has been established.

Downsides:
The smell can be an issue if you add more waste than they can consume. Sawdust or coffee can help here too.
Posted by Unknown at 7:58 PM No comments: Links to this post

our stall at Leura Harvest Festival 2014 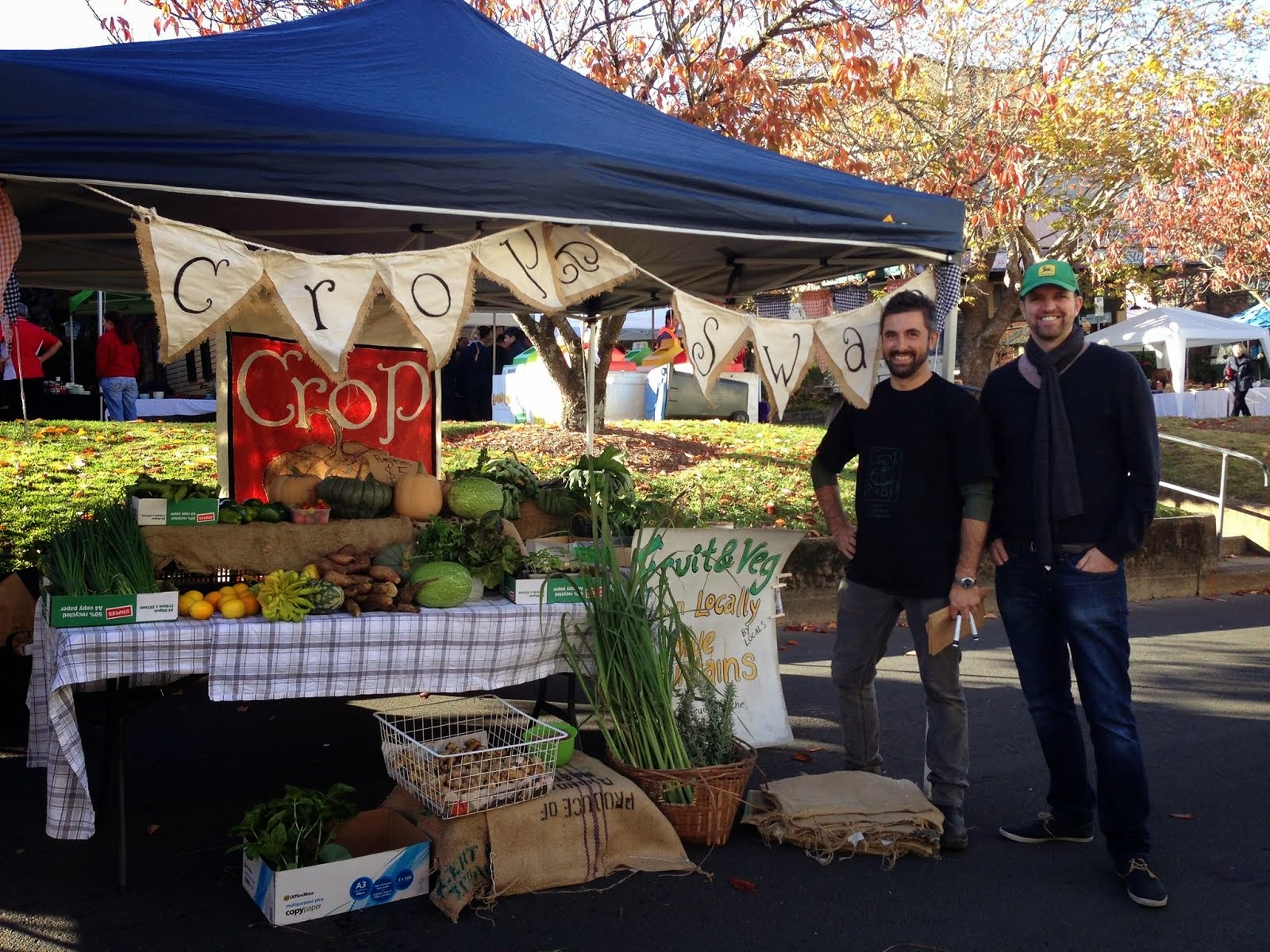 What is the Crop & Swap?

The Crop & Swap is a vibrant local food swap in the lower Blue Mountains. It's a monthly event where hundreds of people who are passionate about growing or making their own food come together, swap produce and share a cuppa!

If you grow your own fruit or vegetables, have chooks or make your own bread or jams, come to our neighbourhood food swap! Everyone is welcome. Simply bring a few or more items to swap or share with others in your local neighbourhood and community.

The variety and quality of items brought each year has been fantastic, from beautiful fruit and veggies, to delicious sour dough breads, even local honey, and cheese.

While we love sharing locally grown food, the Crop & Swap is also a great way to meet others and share recipes, gardening tips, and local knowledge. Come along and make some new friends in our growing swap Crop & Swap community.

We Hope to see you there!